About Equitable Savings and Loan

As one of the nation’s oldest Savings and Loan, The Equitable Savings and Loan Company has served our community for almost 150 years. Initially established in 1873, we have helped thousands of families, businesses, and individuals with quality products that enable dreams to be met. Throughout our history, we have found that pride in our community and the opportunity to serve.

The year was 1873, shortly after the conclusion of the American Civil War when herds of buffaloes still roamed the Wild West, Ulysses S. Grant was in the White House, and horse and buggies were the principal form of transportation. In the Allegheny Plateau region of Eastern Ohio, Cadiz was essentially a self-sustaining, agricultural community. Most everything needed for daily life was either built at home or manufactured locally. There were water-powered flourmills built along the streams, stagecoach stops and taverns, banks, and other local businesses. Coal was mined nearby on a small scale to satisfy local demand.

On January 6, 1873 a group of Cadiz citizens met for the purpose of organizing a savings and loan company so that ordinary individuals would have a place to invest their money and borrow funds to buy or build a home. Banks at that time dealt primarily with commerce and industrial needs. Two weeks later, on January 23rd, the Cadiz Building and Loan opened for business, this being the original name of our present company. Colonel John S. Pearce became our first president.

During this time, savings and loans operated on a serial or terminating charter whereas every seven years, the companies would conclude their affairs and go out of business. In anticipation of this, a new charter would be secured and a new company formed. In 1885, the Cadiz Building and Loan became the Equitable Building and Loan Company. This practice continued into the 1890’s when the present type of permanent charter was established.

On September 10, 1898, at the termination of a former charter, The Third Equitable Building and Loan Company was issued the permanent charter that we are incorporated under today. This charter states that “Said corporation is formed for the purpose of encouraging and aiding its members in erecting, building and providing houses for themselves and families, for profit and other purposes.” During our 100th Anniversary in 1998, we were presented a signed Resolution from then Ohio Governor George V. Voinovich attesting that “The Equitable Savings and Loan Company has fulfilled these duties and responsibilities with due diligence and dedication, demonstrated integrity and efficiency for over 100 years.”

The Equitable Savings and Loan Company has a long history with this community. Growth was slow during the early years when the office was only open only on Mondays, in rented office space at a local bank. At that time, most Savings and Loans were open for business one day per week. In 1910, Equitable absorbed another local institution, The Independent Building and Savings Association and in 1937, the Harrison Building and Loan Company. In October 1931, we opened full time, six days per week. Even though the nation was in the Great Depression and it was a period of massive bank failures, assets continued to grow.

During World War II, money was plentiful with deposits exceeding the demand for mortgage loan. The building of homes was restricted at the time and lending was primarily for small repairs and occasionally for the purchase of a home that was constructed before the war. We met the challenges of adapting to the war standards by the purchasing of war bonds since Pearl Harbor and for the duration of the war.

Real growth came after World War II with the new boom in housing and many GI loans were granted. In 1952, the Articles of Incorporated were amended changing our name to The Equitable Savings and Loan Company and in 1953 ground was broken for our new building at 114 South Main Street, which was to be constructed mostly of steel and reinforced concrete. The grand opening was held on May 3, 1954 with around 1100 people touring the new facilities from 8:00 AM to midnight.

The next three decades were also times of growth for The Equitable Savings and Loan while the coal mining industry provided ample wages and benefits to the community. In 1973 design work was completed for the remodeling and expansion of our building. This included the addition of two retail buildings along the south side of our office. Construction was completed in 1974.

With the decline of local industries in the 1980’s and the ensuing period of high unemployment, the area was challenged to adapt and adjust. As interest rates rose to record heights, fewer loans were made and a greater emphasis was placed on the purchase of high quality Mortgage Backed Securities and other short-term investments. While other savings and loans were in a financial crisis from excessive practices, our strategy was to operate in a safe and sound manner, while continuing our mission to assist the people of our community in the savings of small or large sums of money and to render the best possible financial service to those who desire to own their homes. We shall always pursue these objectives.

During the first ten years of our existence, there were several Executive Officers who have managed our company, but since then there have only been six. Alfred P Sheriff served from 1883 until his death in 1929, when his son, Alfred P. Sheriff, Jr. assumed his role. Like his father, Alfred Jr. ran the company until the date of his death. In 1955 Philip M. Cessna was hired to manage the company. Phil, a graduate of Ohio State University, came to Equitable from National City Bank where he had worked for 15 years. For the next 25 years he managed our company. When he retired in 1980, Janet T. Adrian was promoted to Managing Officer. After a 41-year career with Equitable, having served in many capacities from Teller to President, she retired in 1998. Upon Janet’s retirement, James E. McMullen II was promoted to Managing Officer, President, and CEO. A graduate of Franciscan University of Steubenville, James began his banking career in 1979 with Bank One and started at Equitable in 1983. James E. McMullen II retired the end of 2018.

Upon his retirement, Darla M. Monteleone was promoted to Managing Officer and also holds the title of President and CEO. Mrs. Monteleone has over 30 years of banking experience. She began her banking career in 1990 with Bank One as a part-time teller working her way up to Assistant Manager before leaving in 1998 to join The Equitable Savings and Loan Company in July 1998 as Vice President and Treasurer. 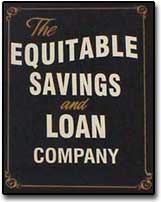 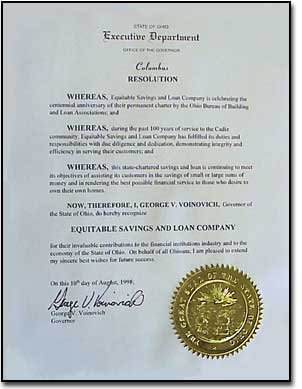